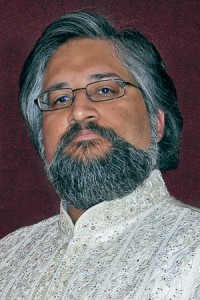 It gives us great pleasure to announce Arshad Ahsanuddin as the guest on episode 096: Write to Let the Demons Out

This week Arshad Ahsanuddin joins the show to talk about his two series Pact Arcanum and Interscission, how his background led to his stories, gay romance themes in science-fiction/fantasy, and the joys of managing all the self-publishing tasks.

Arshad is a hematopathologist living in Canada. The irony of a physician who specializes in blood disease creating a series of vampire novels has been remarked upon by roughly every person he has ever met.

He’s always been fascinated by the creative arts, and has dabbled in various media from poetry to prose, film photography to digital design. The idea for the Pact Arcanum Saga has been kicking around in his head for over ten years. Why vampires? Because Joss Whedon made them popular back then, just like Stephanie Meyer has now. The story was a product of its times, and he created it purely for fun, never intending to write it down.

He had always wanted to write a novel, though, and started with the story that he had played around with in his head for so long. Purely for practice, you understand. It wasn’t until the words were on paper that he realized how complex and detailed the story had grown. The people he showed it to pushed him into adapting it for publication, and here we all are. It has been an enjoyable obsession and a labor of love.