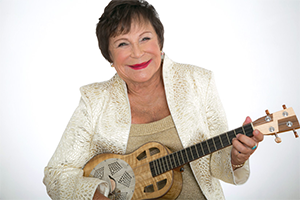 It gives us great pleasure to welcome D’yan Forest and Stephen Clarke as the guests on Season 6, Episode 24 – Try Thinking The D’yan Way!

D’yan Forest & Stephen Clarke join us to talk about living a full life, creating both stand-up and written comedy, their co-authored memoir “I Did It My Ways” and asking the difficult questions.

Mentioned in this episode:

D’yan Forest has always done things her way – or her ways, because she’s lived a dozen different lives. She’s been a desperate Boston housewife, a New York night-club singer and a Paris swinger. She’s been the only Jewish girl in a Christian choir and the female pianist in a transvestite cabaret. She had day jobs teaching basketball, piano and sex education. She dated Paris’s second-ever female bus driver, a transsexual rock guitarist and a defrocked nun. She also managed to get German friends to visit Nazi concentration camps, on her personal quest to understand why her European relatives were massacred. At 86, D’yan is still a working stand-up comedian and musician, but she’s much, much more than that, as her hilarious but heartfelt memoir reveals.

Stephen Clarke grew up in Bournemouth (the Bondi Beach of England), where he played bass in some of the worst rock bands in musical history before leaving town to study French and German at Oxford. After university, he got a series of high-powered jobs – in the wine industry (grape picking), tertiary sector (washing up in a German hotel), and in international diplomacy (teaching English to bored French businessmen). Meanwhile I started writing novels, all of which remained unpublished due to a vast – and never before revealed – conspiracy in the global publishing industry. Deciding to self-publish, his Paul West series includes a sequel to a sequel. Stephen also does his bit for non-fiction, though still through his delightful comedic lens.