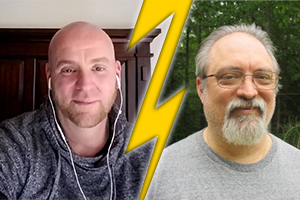 It gives us great pleasure to welcome Jamie Fessenden and Freddie Feeley, Jr back as the guests on Episode 207 – More Fun With the Creepy Scenes!

Authors Jamie Fessenden and Freddie Feeley, Jr team up to share with us their forthcoming horror novel, Borderlands, and what it was like to team up.

NOTE: Jamie accidentally said “bodega” in this episode. He caught it after the fact and knew he meant “botánica” – offering his apologies to anyone he confused.

Jamie Fessenden is an author of gay fiction in many genres. Most involve romance, because he believes everyone deserves to find love, but after that anything goes: contemporary, science fiction, historical, paranormal, mystery, or whatever else strikes his fantasy.
Jamie set out to be a writer in junior high school. He published a couple short pieces in his high school’s literary magazine and had another story place in the top 100 in a national contest, but it wasn’t until he met his partner, Erich, almost twenty years later, that he began writing again in earnest. With Erich alternately inspiring and goading him, Jamie wrote several screenplays and directed a few of them as micro-budget independent films. He then began writing novels and published his first novella in 2010.
After nine years together, Jamie and Erich have married and purchased a house together in the wilds of Raymond, New Hampshire, where there are no street lights, turkeys and deer wander through their yard, and coyotes serenade them on a nightly basis.
Jamie recently left his “day job” as a tech support analyst to be a full-time writer.

F.E.Feeley Jr is married to his wonderful husband, John. He’s a father to their German Shephard, Kaiser. Freddie is an avid reader of Mysteries, Horror, and Suspense, and biographies. He’s also a gamer. His favorites include Dragon Age, Mass Effect, Star Trek Online, Skyrim, Assassin’s Creed, Fallout, and Civilization Five. He LOVES to cook and dives into trying new recipes (hint hint). He’s an avid music junkie from POPular music to Opera, to Showtunes, Gospel, Rock, Rap, and Hip Hop. Finally, he’s a Poet – a lot of which is offered on his site for free.
As if that weren’t enough, he’s the author of six published works – four full length novels and two short stories featured in anthologies.