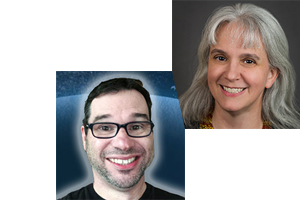 It gives us great pleasure to announce J Scott Coatsworth and Angel Martinez as the guests on episode 079: Flash Fiction Takes Flight!

This week J. Scott Coatsworth (Moderator of Queer SciFi) and Angel Martinez (of Mischief Corner Books) join us to talk about the art that is the Flash Fiction contest, what they looked for as judges, and to announce the release of the contest’s anthology: Flight. As a bonus, SA “Longform” Collins shares what he learned as a competitor!

Check out the Flight anthology and join the Queer SciFi community:

Connect with and support Angel Martinez:

J. Scott Coatsworth has been writing since 4th grade, when he won a University of Arizona writing contest for his first sci fi story (with illustrations!). He finished his first novel in his mid-twenties, but after seeing it rejected by ten publishers, he gave up on writing for a while.

Over the ensuing years, he came back to it periodically, but it never stuck. Then one day, he was complaining to Mark, his husband, about how he had been derailed yet again by the death of a family member. Mark said to him “the only one stopping you from writing is you.”

Since then, Scott has gone back to writing in a big way, finishing more than a dozen short stories – some new, some started years before. After seeing his first sale, he’s embarking on a new trilogy. He also runs the Queer Sci Fi (http://www.queerscifi.com) site, a support group for writers of gay sci fi, fantasy, and supernatural fiction.
. . . . . . . . . . . . . . . . . . . . . . . .
Angel Martinez is the unlikely black sheep of an ivory tower, intellectual family. She has managed to make her way through life reasonably unscathed. Despite a wildly misspent youth, she snagged a degree in English Lit, married once and did it right the first time, (same husband for almost twenty-four years) gave birth to one amazing son, (now in college) and realized at some point that she could get paid for writing.

She currently lives in Delaware in a drinking town with a college problem and writes Science Fiction and Fantasy centered around gay heroes.

One thought on “J. Scott Coatsworth and Angel Martinez”