J. Scott Coatsworth, Angel Martinez, and B. A. Brock 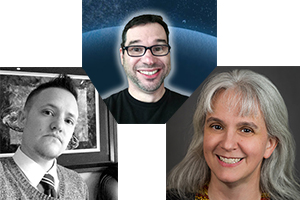 It gives us great pleasure to announce J Scott Coatsworth, Angel Martinez, and B. A. Brock as the guests on episode 124: Renewal, or Handsoap for the Masses!

This week J. Scott Coatsworth (Moderator of Queer SciFi, founder of QueeRomance Ink), Angel Martinez (of Mischief Corner Books), and B.A. Brock (Also of Queer SciFi) join Vance to talk about the art that is the Flash Fiction contest, what they looked for as judges, and to announce the release of this year’s anthology: Renewal. Scott then shares his upcoming epic science fiction release, The Stark Divide.

Check out the Renewal anthology and join the Queer SciFi community:

Connect with and support Angel Martinez:

Connect with and support B.A. Brock:

J. Scott Coatsworth was indoctrinated into fantasy and sci fi by his mother at the tender age of nine. He devoured her library, but as he grew up, he wondered where all the people like him were.

He decided that if there weren’t gay characters in his favorite genres, he would remake them to his own ends. He has published fifteen stories, including two novels.

He runs Queer Sci Fi and QueeRomance Ink with his husband Mark, sites that celebrate fiction that reflects queer reality.

Angel Martinez is the unlikely black sheep of an ivory tower, intellectual family. She has managed to make her way through life reasonably unscathed. Despite a wildly misspent youth, she snagged a degree in English Lit, married once and did it right the first time, (same husband for almost twenty-eight years) gave birth to one amazing son, (now in college) and realized at some point that she could get paid for writing.

She currently lives in Delaware in a drinking town with a college problem and writes Science Fiction and Fantasy centered around gay heroes.

B. A. Brock has lived most of his life in the Pacific Northwest, with a couple years in Oklahoma. He graduated with a Bachelor’s of Science in 2007 at Portland State University–which he mostly uses to contemplate how we can achieve a civilization more closely aligned with Star Trek.

During a round of Dungeons and Dragons, he discovered a desire to write out some scenes from his character’s story. Those scenes became an obsession, that obsession led to writing classes, and an author was born.

When not writing, Brock spends his time reading/reviewing novels, training for marathons, hanging out with his dog, and bemoaning the fact that the world has yet to make a decent gluten free doughnut.

4 thoughts on “J. Scott Coatsworth, Angel Martinez, and B. A. Brock”