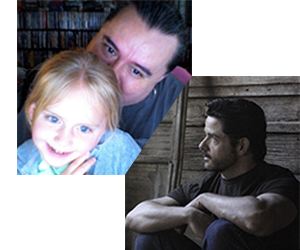 SA Collins and Vance Bastian take back the  microphone for Episode 139: Out of Print!

This week Baz and Vance take back the microphone to talk about the status of LGBTQ representation in television and film!

SA “Baz” Collins:
SA Collins hails from the San Francisco Bay Area where he lives with his (legal) husband, their daughter and, wonder of all wonders because he only just broke 50, a whirlwind of a granddaughter (pictured ). Along with two exotic looking cats, they happily live out the Republican Neo-Con nightmare. Their home is filled with laughter and love whilst shouting at the top of their lungs (or very near to) – something that causes great aggravation to the hubby who prefers solemn quietude (he’s seldom rewarded for his wishes – though he tries). Science and knowledge reign supreme in their home and no topic is too sacred to discuss. In their near 20 years together they’ve (truly) not had a single argument – so they must be doing something right.

Vance Bastian:
Vance Bastian loves being a professional storyteller. He writes urban fantasy about sandmen and reapers. He has grown his acting and voice background into to a career performing voice-over work and narration for both radio and audiobooks.

He is also a founding host of the WROTE podcast – bringing you interviews and news of authors who write, perform, and tell LGBTQ stories.

When nobody’s looking, Vance is a complete sci-fi and fantasy geek.