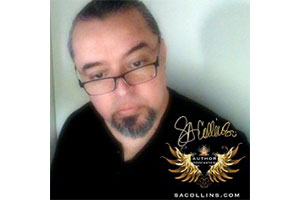 It gives us great pleasure to put SA ‘Baz’ Collins in the guest spot on Episode 244 – Beware Native Authors in Your Midst!

Join us for a Native American (specifically, the Haudenosaunee/Iroquois) culture discussion as our very own, SA ‘Baz’ Collins, presents his latest NineStar Press release, Beware Mohawks Bearing Gifts, Book One of the Cove Chronicles series. We also chat a bit about his other release, Before the Fall, the second book in his re-release of his Angels of Mercy series. And we wrap up with a brief chat about race/culture representation by non-PoC authors.

Books Mentioned in this Episode:

SA “Baz” Collins hails from the San Francisco Bay Area where he lives with his husband, and a kitten named Taki. A classically trained singer/actor (under a different name), Baz knows a good yarn when he sees it.

Based on years of his work as an actor, Baz specializes in character study pieces. It is more important for him that the reader comes away with a greater understanding of the characters and the reasons they make the decisions they do, rather than the situations they are in. It is this deep dive into their manners, their experiences and how they process the world around them that make up the body of Mr. Collins’ work.