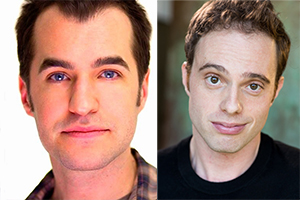 It gives us great pleasure to welcome husbands Tim O’Leary and Robert Rice as the guests on Episode 249 – This Guy Turns Into A Demon!

Husbands Tim O’Leary and Robert Rice join us to discuss the creation, writing, producing and acting for their audio drama podcast “Uumbaji” AND their upcoming series, “Demonhuntr.” It’s a great, laugh-filled conversation to start off the New Year!

Series Mentioned in this Episode:

Tim O’Leary is a writer/director who began his writing career as a New York playwright, and his works have premiered in the New York International Fringe Festival and Gay Fest NYC. Following a SAG-produced reading of his pilot Wolf Island, Tim relocated to Los Angeles. He is a graduate of the UCLA Professional Program in Television Writing, and with his husband Robert Rice produced a pilot for the series Al Malone, Private Eye, starring Angela Lewis (FX’s Snowfall) and directed by Q Allan Brocka (The Eating Out series, Boy Culture.)

He was one of the co-creators of and appeared in the comedy series Moms Anonymous (Amazon Prime.) He is the creator of the upcoming audio drama podcast Uumbaji, starring J. Mallory McCree (Homeland, Good Trouble), produced by Raul Vega (Rose Drive), and recorded at famed film composer Hans Zimmer’s studio. He founded his production company Freaky Fighty Funny Films in order to create projects inspired by his love of horror, comic books, fantasy, kung fu movies, musicals, LGBT stories, mythology, and basically anything tied to geek culture from a queer perspective. He is the head writer, executive producer, and director of the first series under this banner, Demonhuntr, which is currently wrapping up principle photography.

Robert Rice is an LA-based actor and singer who spent several years performing in musical theater in New York City before moving to Los Angeles. He is a frequent guest artist on the Instagram series Wait What (@waitwhatcomedy) and makes frequent appearances in sketches by Youtube comedian David Spates. He and the rest of his barbershop quartet, The Accidentals, were recently featured in the national GEICO commercial A Barbershop Quartet Plays Basketball.

He has appeared on Pink Collar Crimes on CBS and Riggle’s Picks on Fox, as well as @Midnight and Mini-mocks on Comedy Central. He also recently performed alongside Vanessa Bayer and Jeff Goldblum on the Jenny Lewis On the Line telethon. Robert plays Harold, a gay telepath, in the upcoming series Demonhuntr. Robert is a producer on the board of Freaky Fighty Funny Films, and is dedicated to fostering new inclusive works in genre film.