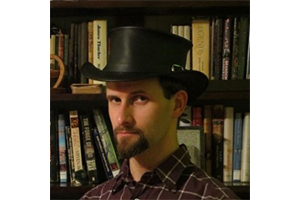 It gives us great pleasure to welcome William C. Tracy as the guest on Episode 215 – 110 Percent Germination!

William C. Tracy joins us to discuss his latest novel, Fruits of the Gods, as well as cosplay, selling at cons, and the importance of inclusivity.

William C. Tracy writes tales of the Dissolutionverse: a science fantasy series about planets connected by music-based magic instead of spaceflight where you can explore aliens, magic, and steampunk!

He currently has five books out, from a coming of age story, to tales of political intrigue, to a Sherlock Holmes-like mystery, to a Jules Verne style adventure, to the first book of his epic space opera, titled THE SEEDS OF DISSOLUTION. Several books include LGBT-friendly elements as well.

William is a North Carolina native and a lifelong fan of science fiction and fantasy. He has a master’s in mechanical engineering, and has both designed and operated heavy construction machinery. He has also trained in Wado-Ryu karate since 2003, and runs his own dojo in Raleigh NC. He is an avid video and board gamer, a reader, and of course, a writer.

In his spare time, he cosplays with his wife such combinations as Steampunk Agent Carter and Jarvis, Jafar and Maleficent, and Doctor Strange and the Ancient One. They also enjoy putting their pets in cute little costumes and making them cosplay for the annual Christmas card.