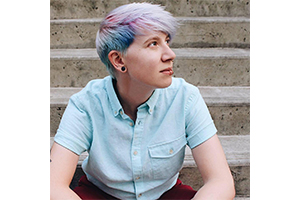 It gives us great pleasure to welcome Tash McAdam as the guest on Episode 197 – Cassius Is Screaming!

Tash McAdam joins us for a ripping conversation about the status of YA, their current release, I Am the Storm, and about the importance of trans and queer representation in literature.

Tash is a Computer Science and English teacher in Canada, although they were born and raised in the hilly sheepland of Wales (and have lived in South Korea and Chile before settling down in Vancouver). Tash identifies as trans and queer and uses the neutral pronoun ‘they’. As an English teacher they are fully equipped to defend that grammar! They have a degree in computer science so their nerd chat makes sense, and a couple of black belts in karate which are very helpful when it comes to writing fight scenes.

Their novel writing endeavours began at the age of eight although they will admit that their first attempt was derivative, at best. Since then, Tash has spent time falling in streams, out of trees, juggling, dreaming about zombies, dancing, painting, learning and then teaching Karate, running away with the circus, and of course, writing.

They write fast-paced, plot-centric action adventure with diverse casts. They write the books that they wanted to read as a queer kid and young adult (and still do!)